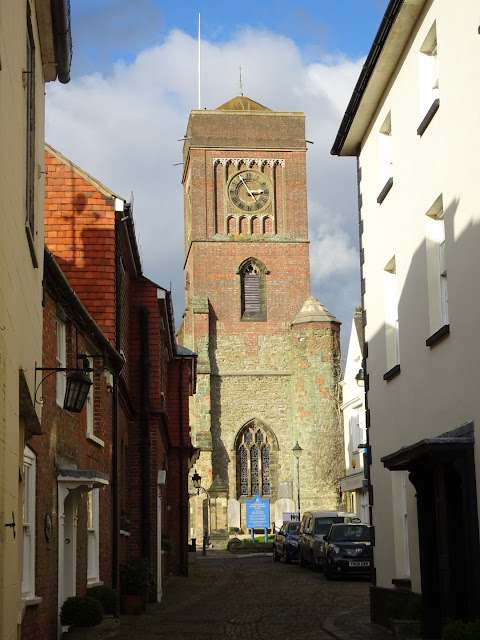 The tower of Petworth's church is the signature of the town, right at the top of the hill. Approaching from any direction it is the first thing you see - from the west it even peaks up behind the grand facade of Petworth House, barging into its perfection as if to remind us that even the greatest lord is mortal.
Yet whereas the big house has remained more or less unaltered since it was built in the 17th century, the tower has had a more chequered history.
The original tower was built in the 14th century, probably replacing the south transept of the Norman church built by the Percy family of Northumberland. The stone base still survives, though a tall wooden spire covered in lead was removed in 1804 and replaced by battlements. 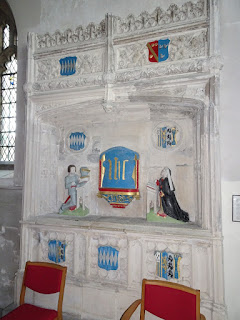 This was clearly not large or grand enough, however, and in 1827 Sir Charles Barry, later famous for the Houses of Parliament, added a tall plastered section with a clock and topped it off with a huge stone spire. It was octagonal with 'broaches', corner pieces that turned the octagonal base into a square to fit on top of the tower. The tower now looked just like the Victorian spires in any suburb.
It was not to last, however. After World War II it was removed and in 1953 the modernist architects Seely and Paget added a simple parapet and stripped off the plasterwork on the clock storey to reveal some rather lovely red bricks forming arch patterns. It was a strange way to create a beautiful and characteristic structure.
The rest of the church is interesting mainly for its monuments.
One of the oldest, dating from 1542, is the tomb of Sir John Dawtrey and his wife. In typical Tudor fashion they kneel facing each other under an ornate vaulted stone canopy. Sir John's helmet hangs above. 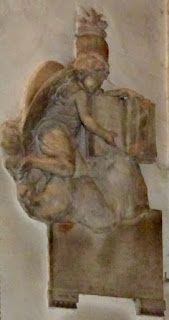 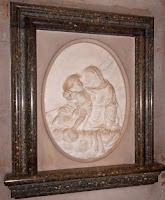 Two works by one of Britain's finest sculptors, John Flaxman, are rather oddly squeezed into corners. Under the tower is a little relief portraying the Madonna and Child, originally part of the reredos. The baby plays joyfully as his mother gazes on - nothing indicates their divine nature except they are sitting on a cloud.
In the chancel, Flaxman's memorial to John Wickens, rector for 40 years up to 1783, is a cherub carrying an open book, presumably the book recording all the good deeds that will get Wickens into heaven. He also stands on a cloud.

Also under the tower is a large allegorical female commemorating the Percy family, erected by their descendants in 1837. It is by John Carew, an artist who did much work for then Earl of Egremont, including memorials in the chancel to John Johnson (1831), Rear Admiral Richard Willis (1829) and others.
When the Earl died in 1837 he was commemorated by a life-size figure in the north aisle by one of Flaxman's pupils, Edward Baily, later famous as the sculptor of the figure of Nelson on top of his column.
The Earl's death brought a windfall for Baily but was disastrous for Carew, who was owed a considerable sum. Perhaps funds were low as the Earl had paid Charles Barry the enormous sum of £30,000 for the tower. Carew sued the noble lord's executors but lost and was declared bankrupt as a result. 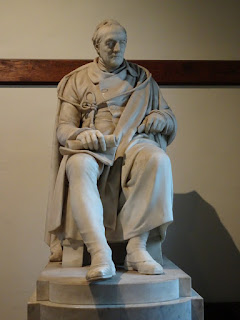 Posted by Chris Partridge at 17:04