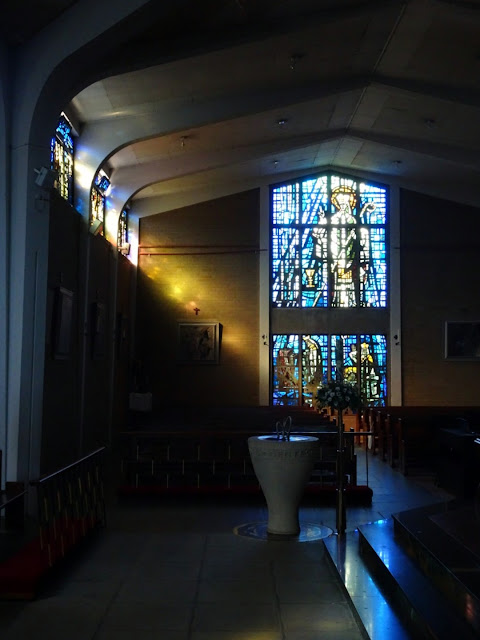 It is easy to dismiss St Richard of Chichester Catholic church as trendy modernist building designed to put a roof over as many people as cheaply as possible. 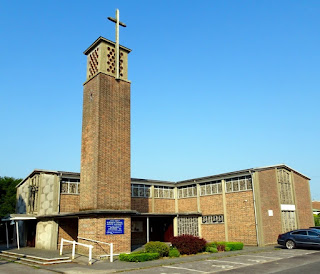 It is true that the architects, Tomei and Maxwell, used industrial components such as concrete beams called portals to create a spacious nave and transepts at low cost. And it is also true that the elements of the design (exposed brick, canopies held up with spindly rods like scaffolding poles and a bell tower that looks like a fire station) were very fashionable in 1958 when the church was built.
But the materials are honest and the composition is attractive. And when you enter the church you discover a truly moving and internationally important work of art - the stained glass that fills the space with rich blues and reds.
It was created by French artist Gabriel Loire, the leading stained glass designer of the 20th century, who was based in Chichester's twin city of Chartres. It is the largest collection of his work in Britain. 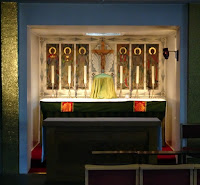 Loire specialised in a technique called dalle de verre or 'slab glass' which is about an inch thick for deeper tones than regular stained glass. The pieces are shaped by cracking or sawing, and the edges are often chipped or bevelled to increase refraction and reflection effects. The window is held together by concrete or resin rather than lead.
The windows depict subjects such as Our Lady Queen of Heaven, the life of St Richard and many others.
They are not the only work of art in the church, however.
The characteristic painted altarpiece depicting the crucifixion and the stations of the cross are by local artist David O'Connell, a graphic designer who attended the church for many years.
And the fine bronze crucifix at the west end is by the Catholic sculptors Philip Lindsey Clark and his son Michael. Philip had fought in the First World War, gaining the DSO, and had created many war memorials and religious works subsequently. He eventually became a monk. 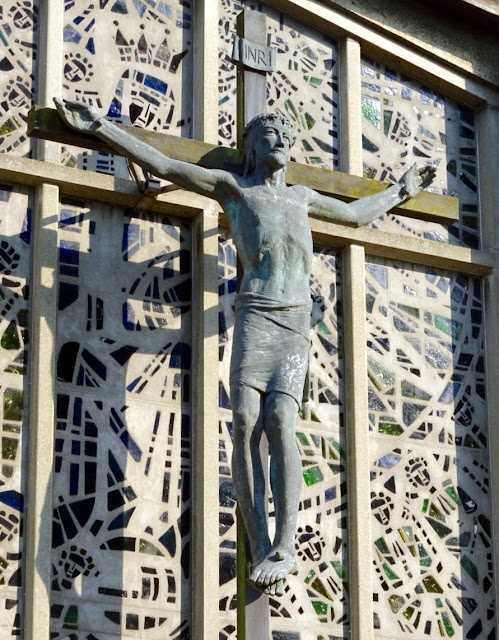 Posted by Chris Partridge at 17:41